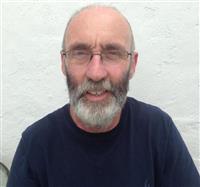 Daithi Kavanagh was born in May 1958. He lives with his wife and two children in Trinity, Wexford, Ireland. Up to 2012 when the recession hit Ireland he was making a living as a musician. He then went back to adult education and completed his Leaving Certificate in 2014. He is now studying for a degree in Irish Culture and Heritage Studies at Wexford Campus. While he was studying he began writing ‘The Gun’ which is the first book in The Tadhg Sullivan Series. His second book in the series called ‘The Brotherhood’ was released in May 2015. He is currently working on the third book in the series. He plays guitar and sings in many of the pubs in his hometown of Wexford where he is often joined by his two children Ella and Rory who play fiddle and flute. In his spare time he likes to walk his two dogs with his wife Caroline.