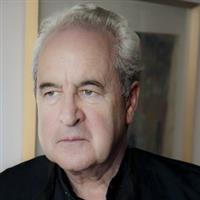 2017 was another vintage year for John Banville, with the publication of his new novel Mrs Osmonde, a masterful and luxuriant reworking of the end phase of the Henry James’ 19th century classic The Portrait of A Lady. Meanwhile, John’s alter ego Benjamin Black was equally busy with another thriller featuring Quirke the pathologist, Prague Nights, and shifting from his usual location in 1950s Dublin to 16th-century Prague. Regarded by many as one of the finest writers in English today,  Banville/Black was born in 1945 in Wexford. After college he worked as a clerk for Aer Lingus, joined The Irish Press as a sub-editor in 1969 and was Literary Editor at The Irish Times from 1988 to 1999. Banville’s novel The Book of Evidence was shortlisted for the Booker Prize and won the GPA award in 1989. In 2005 he was awarded the Booker Prize for his novel The Sea set in Rosslare. Over the coming years came a procession of awards, including the Franz Kafka prize, the Irish PEN Award, the Austria State Prize for European Literature and the Prince of Asturias Award. He was elected a Fellow of the Royal Society of Literature in 2007. His most acclaimed novels also include Doctor Copernicus (1976), Mefisto (1986), The Untouchable (1997), Shroud (2002), The Infinities (2009), and The Blue Guitar (2015). He’s also written several plays for the stage and radio, one of which formed part of Wexfour, four one-act dramas by Wexford authors Banville, Eoin Colfer, Billy Roche and Colm Tóibín. He’s also published non-fiction books about Dublin and Prague. John Banville’s stated ambition is to give his prose “the kind of denseness and thickness that poetry has”. As Fintan O’Toole has written, “in Banville’s work there is something else that does hold still, that manages to defy time and death. It is the novel itself. Banville’s prose, even at its most knowing and ironic, seems to be chiseled sentence by sentence into imperishable stone.”